The Golf. The car. And the confidence in thermally conductive pastes by Dietrich Müller GmbH.

Versatilely used and to be found almost everywhere – the technical films of Dr. Dietrich Müller GmbH are used e.g. for fuel cells.

Supplier to the Queen – even the Queen of England relies on tailor-made seals from Dr. Dietrich Müller GmbH.

Fast on the way and yet everything remains insulated – even the Transrapid in Shanghai relies on tailor-made insulating parts from Dr. Dietrich Müller GmbH.

Supplier to the Queen – even the Queen of England relies on tailor-made seals from Dr. Dietrich Müller GmbH

Electricity converted into movement and optimally insulated, the tapes and insulating materials from Dr. Dietrich Müller GmbH have also proven themselves in the electric motor sector.

Technology for medicine. Films from Ahlhorn are also used here.

Polyimide films combine a special profile of properties. A very high temperature resistance, chemical resistance and electrical values allow polyimide film to be used in a wide range of applications.

These chemically cross-linked polyimide films are used in traction machines, in laminates with Nomex, in printed circuit board production and in applications that require a material that is resistant to radioactivity. Insulating parts are manufactured from this material.

The Flexiso PI FI 16000 is used in applications that require high temperature resistance and chemical resistance, but do not place the highest demands.

These are mainly adhesive tape applications or housing insulation. Insulating parts for various applications are also manufactured from this material.

Stamped parts, moulded parts and insulating parts can be produced from the polyimide films mentioned above.

Data sheets of the polyimide foils

The data sheets of the polyimide films can be downloaded by clicking on the PDF symbol in the table. If a data sheet is not available, it can be requested by email.

UL-approval of the polyimide films

The polyimide films are UL approved. Due to our approval as UL recognized repackager the materials do not lose their UL approval.

Sources of supply for polyimide film 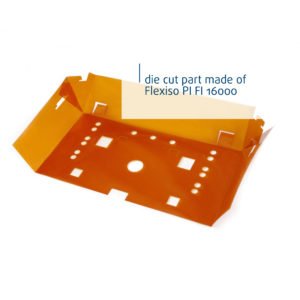 Thank you for visiting our material page. We can also offer you the precision parts you need for your application:

Here you can order cuttings or sample materials. Click here

Of course, you can also send your inquiry for precision parts by email: anfrage@mueller-ahlhorn.com